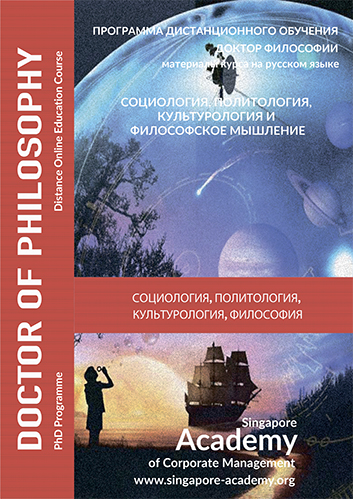 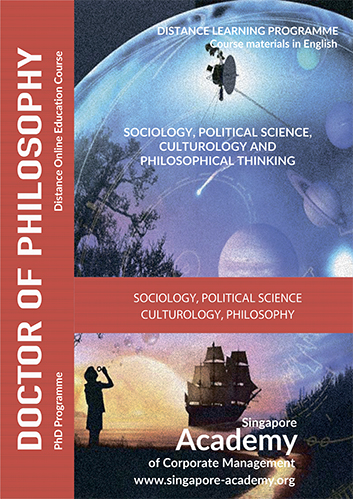 Unique program, certified and accredited
The Doctor of Philosophy course reveals the topics of sociology, social forecasting and management, cultural studies and political science, presents a set of relevant humanitarian knowledge on key issues of the life of modern society, revealing not only the experience of the past, but also offering a promising view of the future. Modern people who use computers and mobile phones, spend most of their time in virtual space, are associated with the axial categories of culture no less than people of the past. It is from the understanding of these historical meanings that today's solutions to most of the most pressing issues, from public to personal, follow. In the learning process, a unique step-by-step method of presenting material will be used, prepared in the style of the best classical schools of thought. The presentation of the material will resemble an exciting computer game, where the passage of the course will be organized from easier to more difficult levels, and philosophy and cultural studies will become your weapon for solving the most difficult external and internal problems. The proposed educational concept is that philosophy and culture are not boring disciplines, but an exciting intellectual game for the development of free thinking, in which everyone can participate.

The target audience
Leaders responsible for the organization and development of business, culture, government relations;
Heads of Strategy Development and Communications Departments;
Owners and managers of small, medium and large businesses;
Heads of public organizations.

Enrollment of doctoral students and terms of study
Beginning of training: monthly from the 1st day of the month.
Duration of study on the program is 12 months (4 semesters).

At the disposal of the doctoral student
Access to course materials in digital format through a personal account;
Remote consultations of a personal tutor throughout the entire period of study, assistance in organizing the process of writing a dissertation work;
Access to the electronic library of the academy;
Access to passing the qualifying exam (in electronic form);
Access to the closed sections of the academy's video channel on YouTube.

Tuition fees and registration of tuition
Total Tuition Fee £ 27,000
Grant Tuition Fees £ 6,000
(issued through MNIIPU or personally, through representatives of the academy).
For more information and assistance in filling out an application for a doctoral study in business - call the contact numbers indicated on the website.

In agreement with the SACM administration, you can choose a topic for a grant:

1. Philosophy and medicine in their historical relationship.
2. Philosophy as theory and method of knowledge.
3. Historical forms of worldview.
4. Place and role of philosophy in culture.
5. System structure of philosophical knowledge.
6. Philosophy and Science: General and Distinctive Features.
7. The role of philosophy in the modern world.
7. Place and time of origin of philosophy in the European sense.
8. The atomic doctrine of Democritus and its influence on medicine.
9. Dichotomy "idealism-materialism" in ancient philosophy.
10. Influence of Confucian ethics on social practice in China.
11. Hippocrates on the nature of man and his diseases.
12. Miletus and Eleyskaya schools: general characteristics.
13. Sophists as teachers of wisdom and master.
14. The main ideas of the philosophy of stoicism.
15. The Renaissance as a synthesis of Antiquity and the Middle Ages.
16. Philosophy of the Renaissance.
17. Distinctive features of rationalism in modern times.
18. F. Bacon on the purpose and tasks of medicine.

By agreement with the tutor, you can choose a topic for a grant:

FILL IN THE APPLICATION FORM

EDUCATIONAL PLAN OF THE PROGRAMME